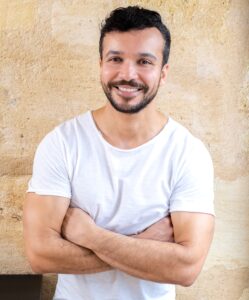 In 2009, Gabriel founded Youth Fusion, an award-winning charity that works to lower dropout rates. Today, Youth Fusion is an international organization that employs 250 people, has worked with over 75,000 students in over 300 schools, and has created over 1,500 jobs for youth in Indigenous, rural and urban settings across Canada (Quebec, Ontario, New Brunswick), France (Nouvelle-Aquitaine, Île-de-
France) and Senegal (Kolda).

The charity is renowned for its experiential learning approach, and has created – among other educational programs – video game creation, artificial intelligence, theatre, environmental design as well as fashion design, entrepreneurship, and cinema projects.

Gabriel also co-founded FIRST Robotics Quebec and the annual Robotics Festival, two initiatives implemented in collaboration with Bombardier, and he initiated the “Don’t give up, persevere” campaign, which mobilized countless public figures during the COVID-19 pandemic.

In the past 13 years, Gabriel was granted various prestigious awards and recognition for his work.

At the governmental level, he received :

He was also recognized by the private sector:

In 2015 and 2016, Gabriel was elected President of the Junior Chamber of commerce of Montreal (JCCM), the largest youth chamber in the World, as well as Governor on the Council of the City’s 375th Anniversary. In Quebec, he was a member of the governmental Committee on Economy and Innovation as well as Special Advisor to the Minister of Culture for the renewal of Quebec’s cultural policy; in Canada, he was one of the eight-member Expert Panel on Youth Employment, a mandate entrusted by Prime Minister Justin Trudeau and the Minister of Employment.

Gabriel graduated from Concordia University in Communication Studies (2007), where he received the John-E.-O’Brien Medal, and from John Abbott College in Professional Theater (2003), where he earned the Departmental Award – and was subsequently inducted into the Hall of Distinction. Gabriel is also a former director of the boards of the Chamber of Commerce of Metropolitan Montreal (CCMM), Quebec-Cinema, Oxfam-Quebec as well as his alma mater’s, Concordia.

Born in Guatemala, his international experiences are extensive; he worked, among other places, in Senegal and in Uganda, and has been a guest speaker/participant in commercial missions or summits in China, France, India, Israel, USA, among others. Gabriel has been living in Bordeaux (France) since 2018.

How was Youth Fusion born ?